After working for two years in the student company Jamii at the Freie Waldorfschule Evinghausen, Tom Silas Piecha undertook a project trip to Kenya with five other Nyendo students from Prien am Chiemsee. There they visited their partner schools in the slums of Nairobi. In the following sections of his report Tom shares this unique experience with us as well as his impressions of his stay in Kenya.

Arrival at the Slum

The journey to the slum was very long. The worst thing was the heat in Sammy’s un-air-conditioned car. There were seven of us in the car, loaded with luggage and the sun was shining on the roof. When we arrived in the slum, the first thing we noticed was the many people. There were people everywhere, some were selling things, others were sitting at the roadside and others were just talking on the street. There were small shops everywhere, everything was dirty, dilapidated and run-down and it smelled very unpleasant. 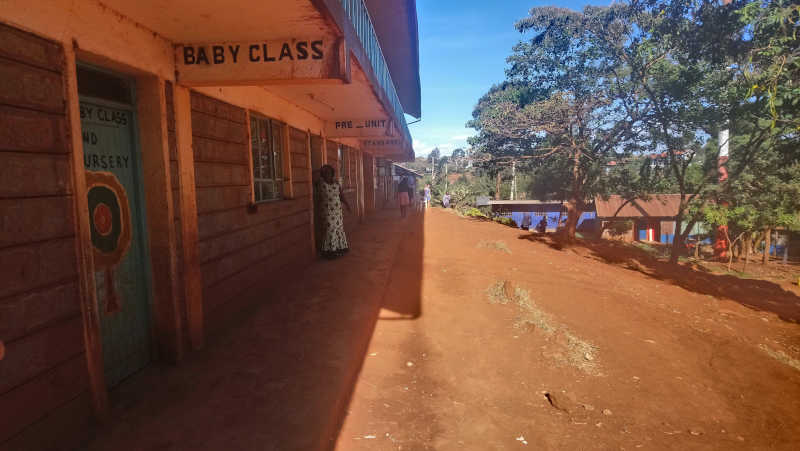 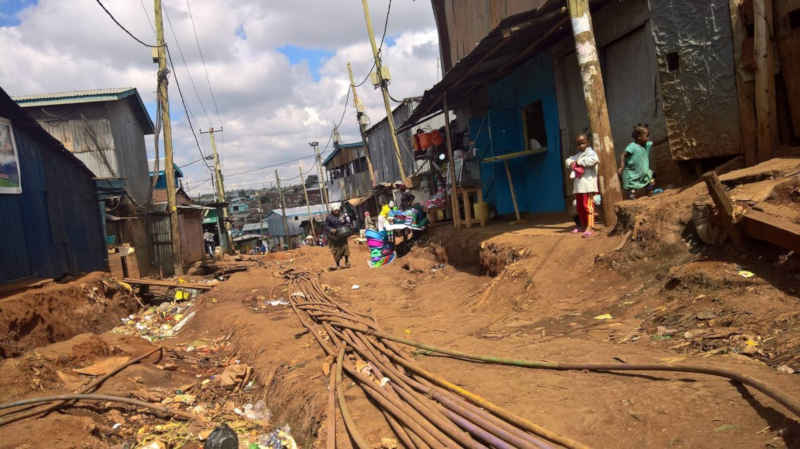 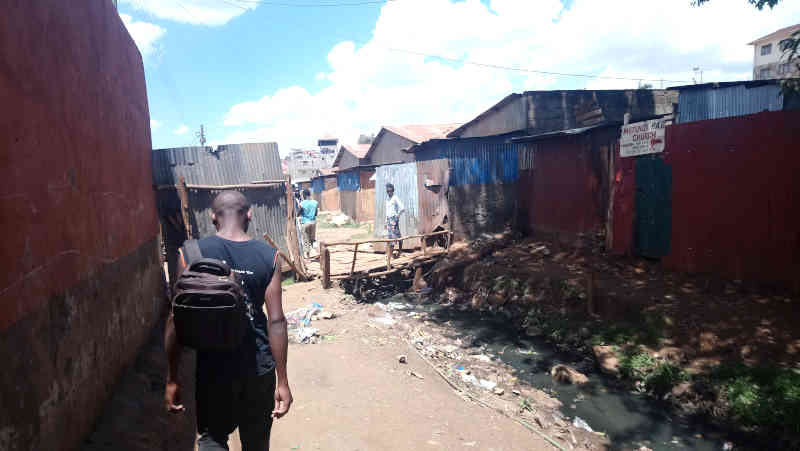 Out and about in the slum

When we arrived at Kangemi Youth School, the headmaster, Simiyu, greeted us very friendly with a big smile on his face. I was staying at Simiyu’s home with Emil. The apartment was very small, with very small windows, through which however no light came in, because the neighboring buildings were very high and swallowed the light. The only light was the electric one, but that was not reliable, because it was out from time to time in irregular intervals. Then only the flashlight remained. The toilet was outside, at the beginning I was only allowed to go there if someone accompanied me and waited for me in front of the door. The same applied to the shower. The room and the drain were the same when showering and when going to the toilet. There was no running water in the apartment. The apartment had one bedroom for Simiyu and his wife, a second room with a bunk bed for the two younger children, but which was cleared for Emil and me, and a living room. The kitchen was a small niche in the living room with a hotplate, about half a square meter in size. The bed had a very thin mattress and instead of a slatted frame there was only a board under the mattress. 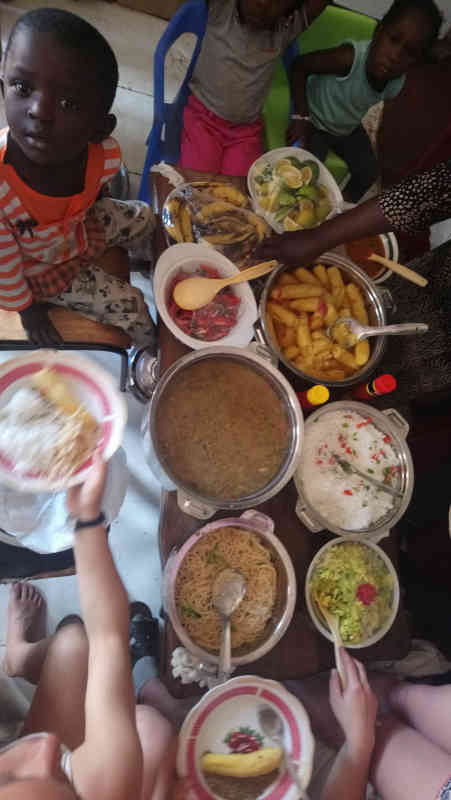 Hospitality in the slum

The next day marked the first of the three days we spent looking at the twelve Nyendo schools. The schools were all very different, some were huge, with many students, others were very small. Some were colourful and very beautiful to look at, others were dark and bare. Since we visited the schools during the Kenyan holidays, there were only a few students at the schools, which we found a pity. But those present were happy to visit us and some schools sang songs or recited poems to us.

In almost every school we were asked to take photos in front of the buildings with students and teachers. For this purpose we were brought in front of the most important backgrounds of the school, like nicely painted, new toilets. 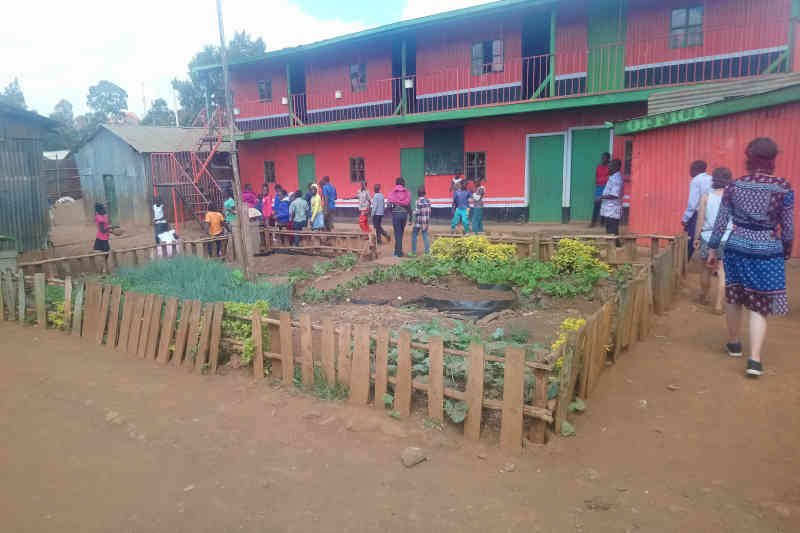 With students in the slum

We played games with the students from several schools at Kangemi Youth School. On the one hand these were games that everybody knows, like volleyball and soccer, but also children’s games from Germany and Kenya. One day we cooked German food with the children (noodle soup and salad with fresh vegetables). 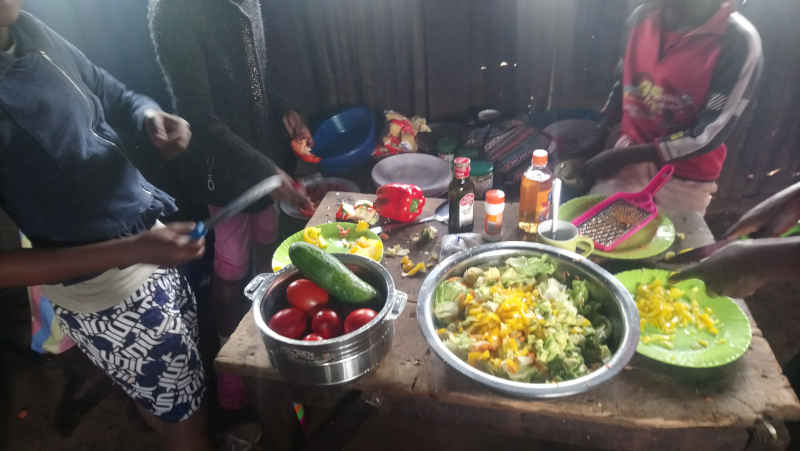 On another day we bound books with the children and a few teachers. We got cardboard for the cover, which the children could paint. The pages were made of A4 sheets of paper folded once and sewn together in the middle. The students and teachers were very proud of their self-made books.

Finally, we organised a football tournament with six schools. The atmosphere was great and in every break the children could drink water with syrup, which everyone was happy about. 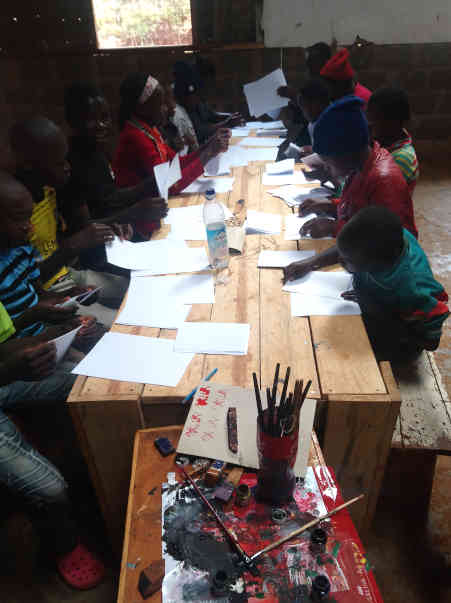 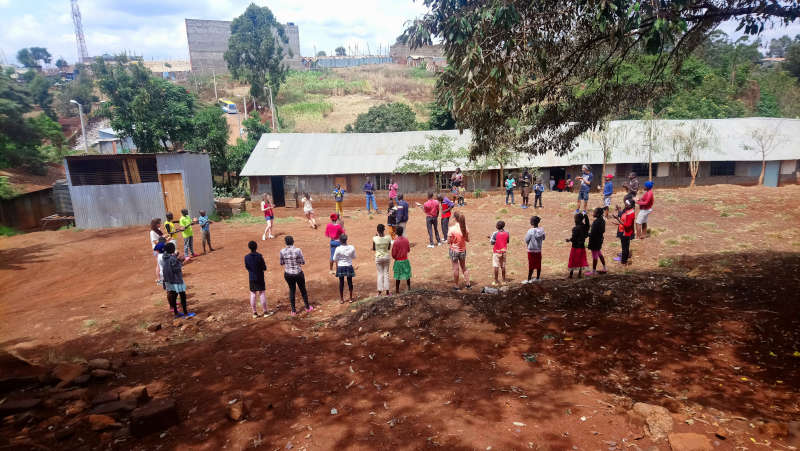 Encounters while playing together

On the very last morning we drove to the Kangemi Youth School for the last time, where they sang and danced for us. There was Coke and Fanta, cookies and streamers. Every teacher present had to give a speech and we sang a song for our Kenyan friends at the end.

Toms Impressions about his project trip

Looking back, apart from the landscape, I was particularly impressed by how people can get by with so little in such an environment as the slum. I find the teachers’ commitment to making the schools a safe oasis for their students in the midst of dirt and misery most admirable. I am grateful for the loving welcome we have received: We were simply part of it and what little there was was shared with us. The people were always in a good mood and open and friendly despite their situation. This project trip was a great experience. I am now aware of how well I am doing in my life and I have found friends there with whom I would like to keep in touch, which is no problem thanks to the Internet. Also in the future I would like to continue my engagement to help them to realize their goals and to offer educational opportunities to the children in the slum.